Just because it burns doesn't mean you're gonna die

Although as we pounded along the forest track by glimmering headtorches, and our dogs felt that downhill equalled a chance to accelerate, I did question how sustainable our pace was.

Back on 4th Feb, Laura and I headed up to the first Dalby Canicross race with several other keen newbies. We finished in around 32 minutes and felt pretty happy with that. I've been training for the past three years for sustained longer distances (55 mile race in March 2017!), and it's only in the last 6 months that Freya and I have worked on our speed together.

The Dalby Dark Run on 17th Feb was the same 5k route but at night! We ran canicross as always, and this time we finished in 28 minutes. No - not amazingly fast for most folks but a pretty considerable improvement in 2 weeks.


Suddenly all the prep work we've been doing for the last 6 months really came together.

As we set off Freya was keen to stretch out, and that meant passing (we started at the back as usual). Once we started passing I had to up the pace and then I realised we were sustaining it. Brian loves to race with Freya, so Laura was along for the ride no matter what she wanted. 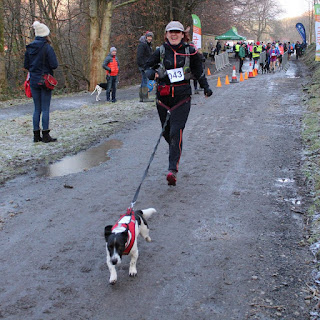 Ten minutes in, and despite ourselves we weren't dying, so I figured sometimes you just have to suck it and see.

But my dog was running her heart out.

And we have been including sprint and faster pace training in our sessions.

And it was only a 5k with no serious hills.

We raced together as a team and she gave me everything she had. Perfect pacing, responding to every cue, encouraging me to speed up on the descents and passing beautifully. That line never went slack in 28 minutes.

I have a lot of work still to do before I can be an equal partner for her.

But I am more than willing to try!

Could we have done it earlier in our racing career? Maybe,  but we needed the last 6 months of training and preparation so that we didn't just run one fast race and then suffer the next day. We ran a great race, and just kept on going with our training.

My heart and soul will always belong to the ultra distances, but just maybe I can be a decent 5-10k canicross racer too.

We're so looking forward to seeing some of you on the February workshops, and we will be releasing the details for the Canicross Skills Adventure sessions next week.

If you've not started your canicross journey yet, the next intro workshops are on 22nd April (morning is solo sessions for reactive dogs, afternoon is a group intro).  http://www.wellconnectedcanine.co.uk/events/canicross/

PS the title was shamelessly stolen from one of my very favourite Pink songs that has gotten me through more tough races than I can remember https://youtu.be/pPtlSF4TlJE


PPS if you want to make sure you find out first about workshops, events and races in the North Yorks area, plus training tips please sign up to our new mailing list: Show form
Posted by Well Connected Canine (Morag) at 15:57