Play with your puppy!

This week we had our first baby gundog workshop. We worked on retrieve, steadiness and control. One of the things I noticed was that all the puppies weren’t initially interested in playing with the toys we offered them.

Not every dog loves playing with toys, but there are some great benefits to playing games of tug with your dog.

Toys can be used to help your puppy learn self-control e.g. wait for permission to grab the toy

Even a short game of tug can tire out a puppy

Tug games can eventually help your puppy to learn to enjoy giving things up, because it’s more fun playing with you than running off with a pair of socks!
The final and most important benefit….it’s really great fun for you both! 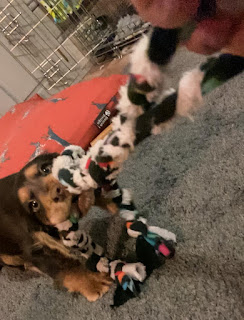 Top tips for playing with your puppy

Play can become very exciting very quickly and result in puppies becoming over excited. Keep sessions short (20-30 secs initially) and games of tug gentle  (no sharp and fast tugging on the toy)

Put some effort into it! Some puppies will immediately want to grab any toy offered, but many need to be encouraged.  Start with the toy on the ground and let your puppy chase and pounce on the toy, you may have to do some running about to get them chasing the toy! Most puppies prefer this to having a toy handed to them or wiggled close to their face.

Use toys with long handles so sharp needle teeth can be away from your hands!

Find the toys they love, consider the texture and material of the toy, your puppy has to like having it in their mouth. You can also keep a few ‘special’ toys hidden away they only get when playing with you.

Move away from puppy if you drop the toy, and give your puppy lots of encouragement to bring it back, once they do you can re-start the tug game.

Practice play in different places, some dogs will only play at home, and are reluctant in other environments, but you can help them learn tug is a great game anywhere! 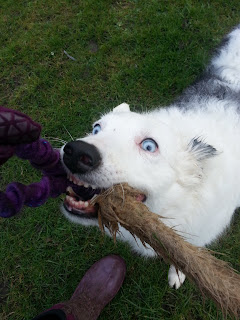 What about chasing balls?

Lots of dogs love to chase a tennis ball, and it can feel like a great way to tire them out and provide lots of exercise in a short space of time.

If your puppy is ball mad there are a few things to consider;

Repetitive high energy exercise results in the release of the hormone adrenaline, the side effect of lots of this type of play can be an over excited puppy who struggles to settle even after the game has ended.

The take-off and landing impact for the ball can put additional wear on tear on the puppies developing joints, the long term effect of which may not be seen until later in your dog’s life.

Read more about the effects of ball play https://barksfromtheguild.com/2015/09/25/is-fetching-really-all-that-fetching-for-dogs/

This doesn’t mean you need to ditch the balls, but you may want to consider how you play with them. Perhaps instead of repetitive fetch games, try hiding the ball for your puppy to find!

The most important thing about play is to have fun with your dog!

Clare and the gang

PS  Don't forget to check out our upcoming classes!

Classes
Posted by Clare Ross at 19:00