Quest Adventure Ross has been here for three weeks now….and we've most definitely been having an adventure

Each puppy I get teaches me something new, and Quest is no exception, this time I’ve learnt just how much of an impact the breeder can have on your puppy!

Quest’s breeder followed the Puppy Plan and I can really see how much of a positive impact this has had on Quest’s development in her first few weeks.

From day one Quest has been happy to settle on her own, often taking herself into a different room to go to a comfy spot for a snooze, she also settled straight into sleeping in a crate next to the bed from the first night. It’s really important to me that my dogs are able to cope being alone, as,  although I spend a lot of time with them, there are times I need to leave them home alone.  I always plan on taking my time to build alone time gradually – but apparently Quest has other ideas 😃

So far Quest has been sociable but respectful with my other dogs, but she’s still making good use of that puppy licence sometimes!!  She’s also really sociable with people, is happy to approach and enjoy a bit of fuss, yet at the same time she also quickly accepts that she can’t go and say hi to everyone she sees.

She’s confident walking on a variety of surfaces, going up and down stairs (yes she thinks it’s a great game and I have to prevent her doing it!), climbing on things and jumping off them. This is great for me, I’ll want us to do a range of different activities with her when she’s older, so she needs to be confident trying new things (without putting herself in danger ideally!)

Initially it was great fun chasing the cats and chickens, but she has very quickly learnt to ignore them with only a small amount of management from me. This is really important, because I don’t want Quest to learn bad habits and I don’t want the other animals to be worried about her. 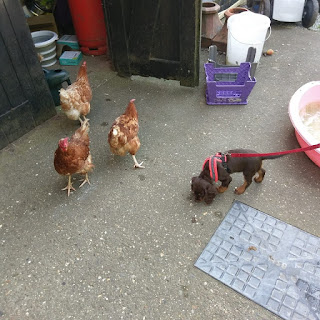 We live in a pretty noisy place (lots of trucks passing the house and machinery banging around)and she has habituated to those noises really well, initially she was a little unsure of them but now ignores it when huge trucks come past the house . We’ve also been loitering in car parks and she’s relaxed with traffic passing.

She's been for two vet visits already (one for 2nd vaccination and once for a little lump (nothing serious) and she's been relaxed and happy throughout (with help from plenty of tasty cheese!)

Don’t worry though, she’s not totally perfect, she still likes to sniff out and eat dead things the cats have left  – so lots of work to do there!

She also had a scary incident with a really loud noise in the house, which really spooked her – more about how we worked though that later!

She’s currently attending our puppy classes, because even though I know how to teach all the exercises, puppy class provides a safe environment for her to learn and have new invaluable positive experiences.

P.s. what's coming up in WCC land? Check out the website for details of all our upcoming classes starting in October!