Introducing Farah: Training and shaping with a deaf collie 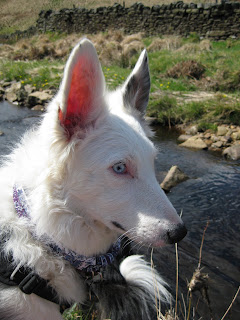 Meet Farah - my very special little girlie! She is about 3 and a half years old and came to me via Wiccaweys Border Collie and Working Sheepdog Rescue. Farah was originally handed into a pound by her family (her collar tag read "My name is Farah and I am a good dog, but very hard of hearing") and unfortunately was due to be put to sleep (PTS) at just 4 months of age. Thankfully a small Irish rescue stepped in, and she found her way to the UK and Wiccaweys. Just 2 months later she came to live with me and life has never been quite the same. 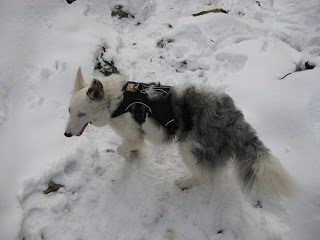 Farah is, as far as we can tell, completely deaf. I haven't pursued BAER testing because she seems so profoundly deaf that its unlikely she can hear much at all. She knew 'thumbs up' as a good girl sign when she came to me but nothing else. Despite being so young, Farah was very worried by feet and just lifting your foot to put on a sock caused her to run out of the room in fear. Thankfully we are mostly past this stage and I'll tell you more about that in another post!

We train using reinforcement methods and as far as possible I have tried to use clicker training and similar principles. We have a special sign for a 'click' and also use a small led keyring as a 'flicker' marker. (will try to post videos of our signs at some point) We found the DDEAF website incredibly helpful, but were surprised by some deaf dog owners/trainers who felt clicker didn't work. It became a personal challenge to build Farah's confidence to the point where she could offer behaviours including anything where she wasn't watching me directly. One of the bonuses with having a deaf dog is you are forced to be entirely hands off otherwise she can't see your signs!!

I'll post more about our training style and signs soon, but for now I just wanted to introduce my lovely little girlie and tell you about our latest project! Having mastered the bow - if I bow at her she offers a bow back, we're now attempting to teach 'cross paws'. Using an idea from Kay Lawrence, I have adapted my target sticks. I have one with a ball on the end = nose touches only, and another with a large bulldog clip = paw touches only. We introduced the paw touch target tonight.....first hurdle was that she offers multiple superfast behaviours i.e. nose bump, paw touch, bow, nose bump and it took a couple of attempts for me to get my timing right - also dependent on her seeing the sign or torch light of course! She is now targeting with her paw from a stand/sit or down so we're pretty happy with that. Next step will be to selectively reinforce just one paw - probably the left since she seems to be a left pawed dog!