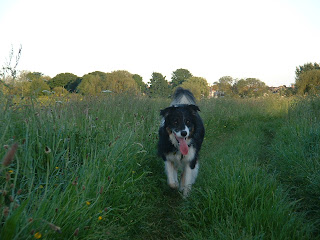 Finn, short for Finnegan, who is now around 9 years old and was adopted from Bothwell SSPCA near Glasgow in 2004. Finn's history suggests he was owned by a gentleman with mental health and alcohol problems who repeatedly left him out to stray. The dog warden picked him up as a 'problem stray' and Finn ended up with the SSPCA for several months during which time he contracted very bad kennel cough and displayed clear signs of kennel stress.
Finn was the first dog I adopted and over the first couple of years we have worked through aggression and reactivity toward adults, children and other dogs. Finn has been severely noise sensitive and displayed various phobias (going out in the dark for example) which we have worked through. Finn is a true soul dog and has changed my life in so many ways
I have excerpts from a training diary I kept which I will try and post up later!
Posted by Morag Heirs at 10:58